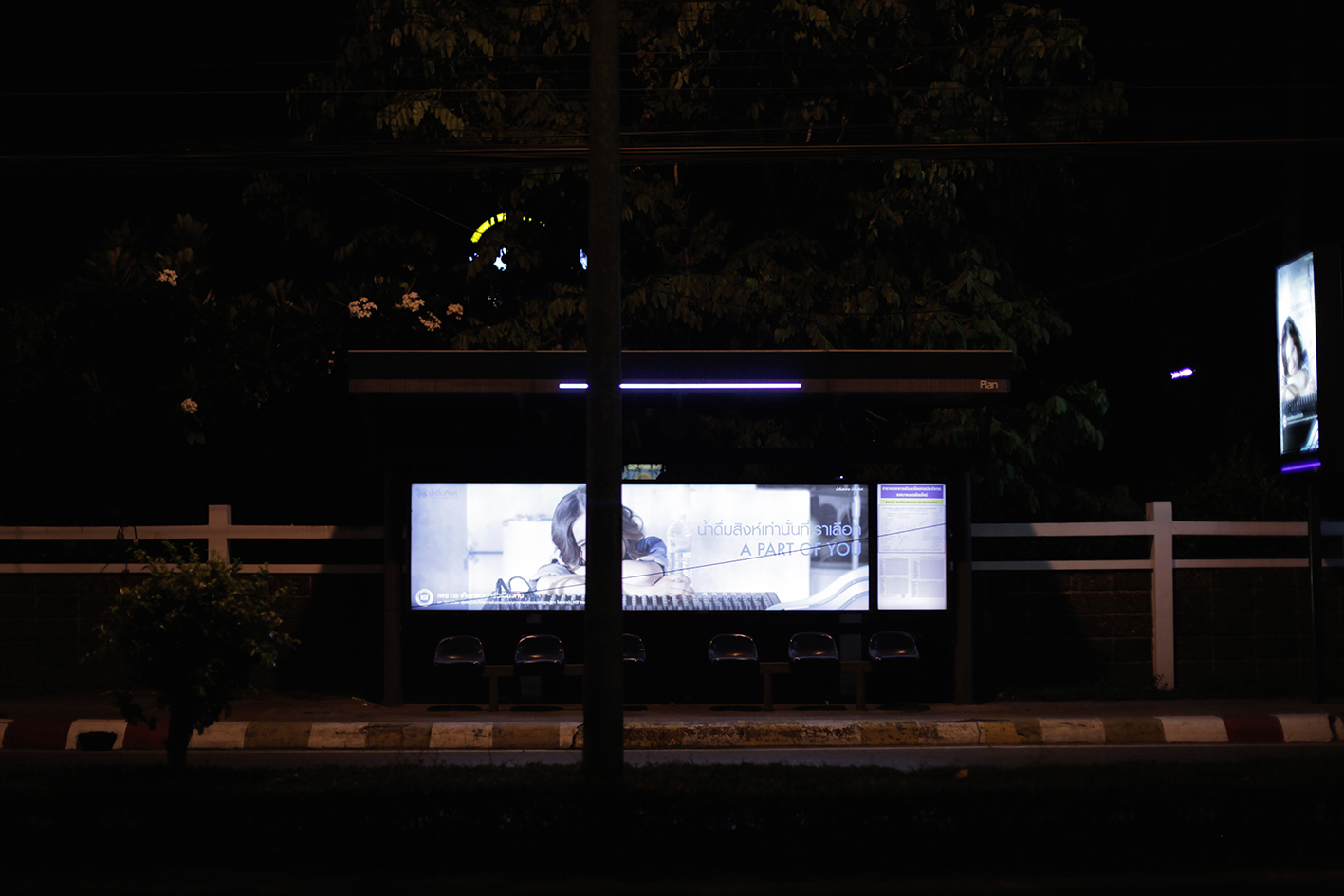 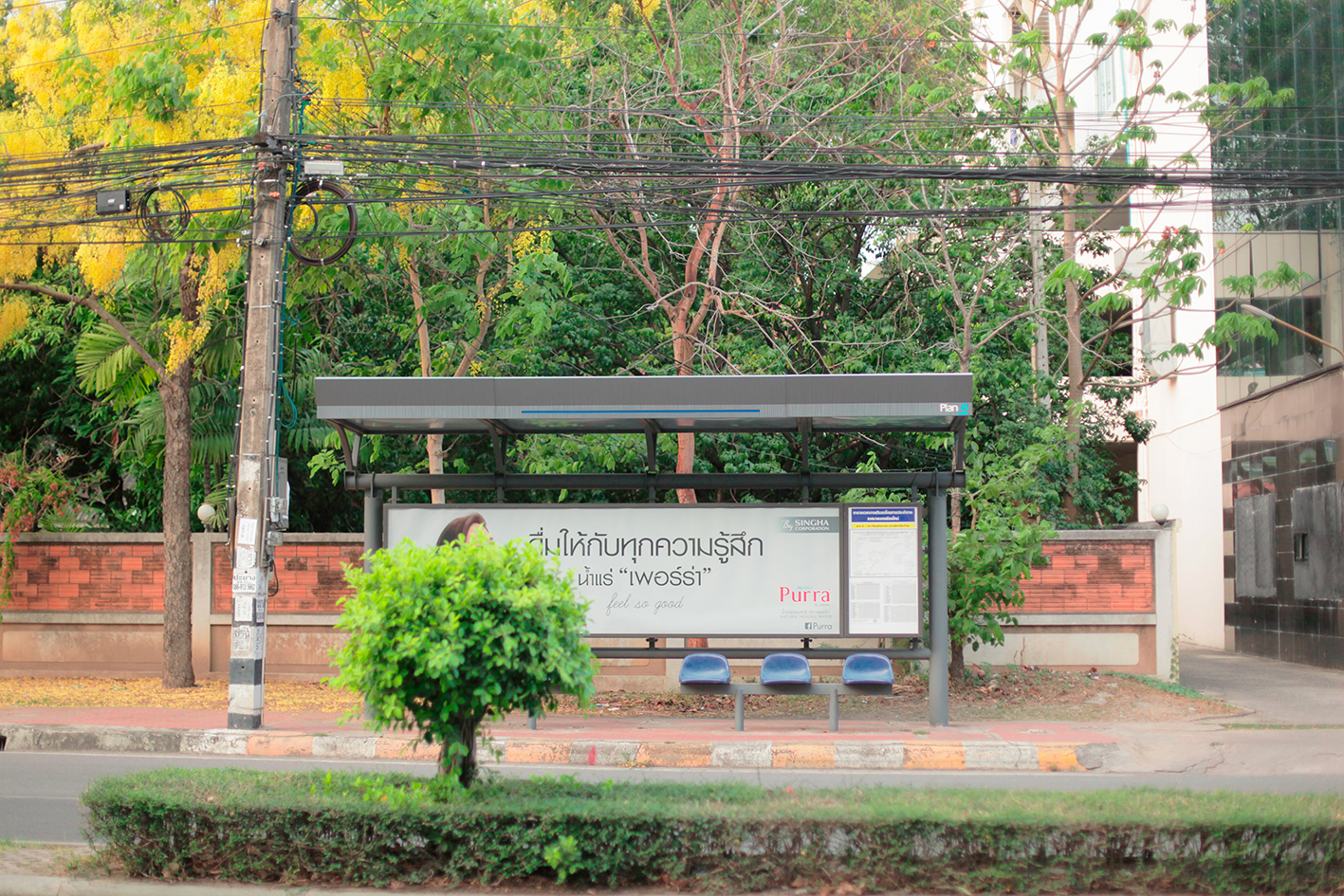 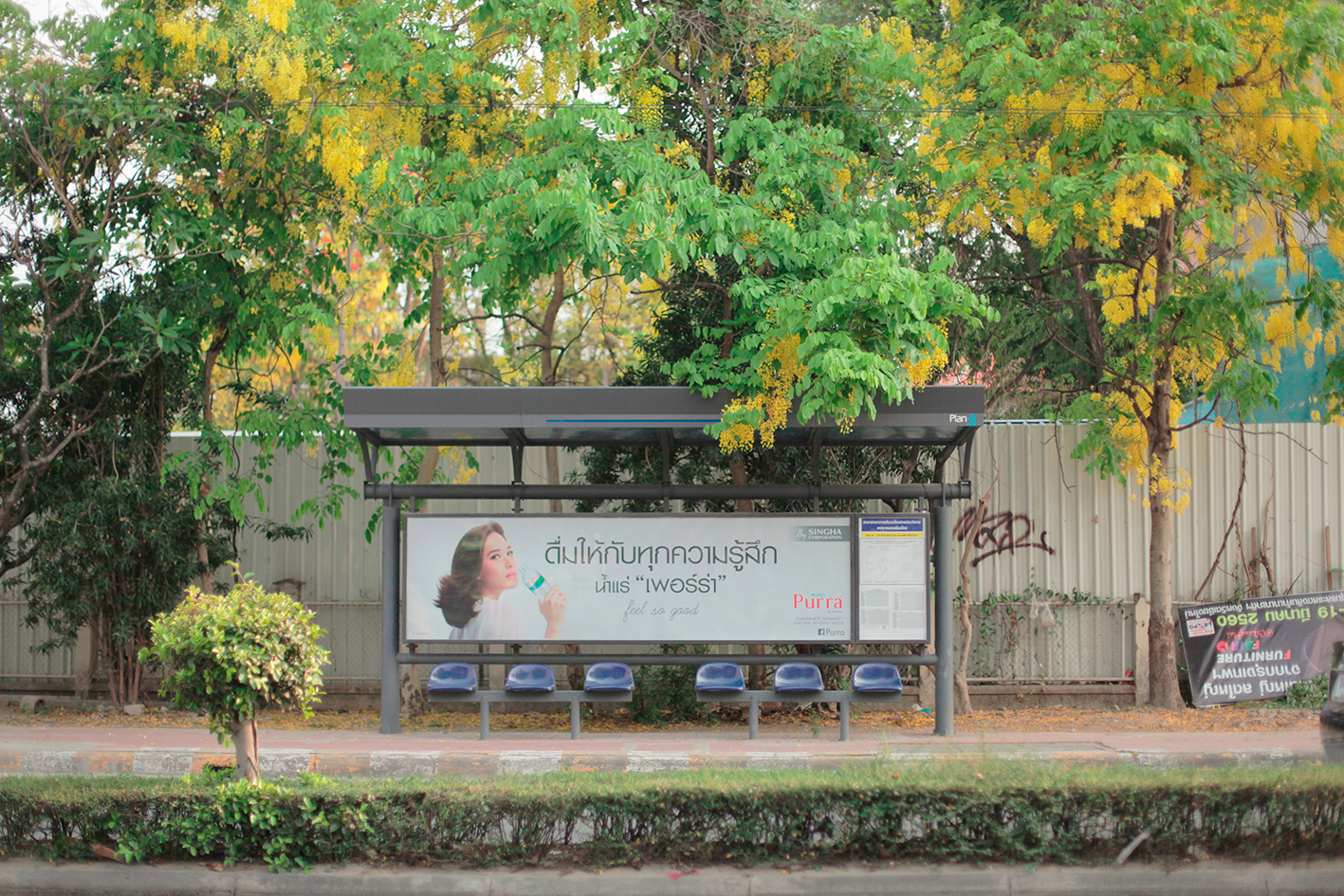 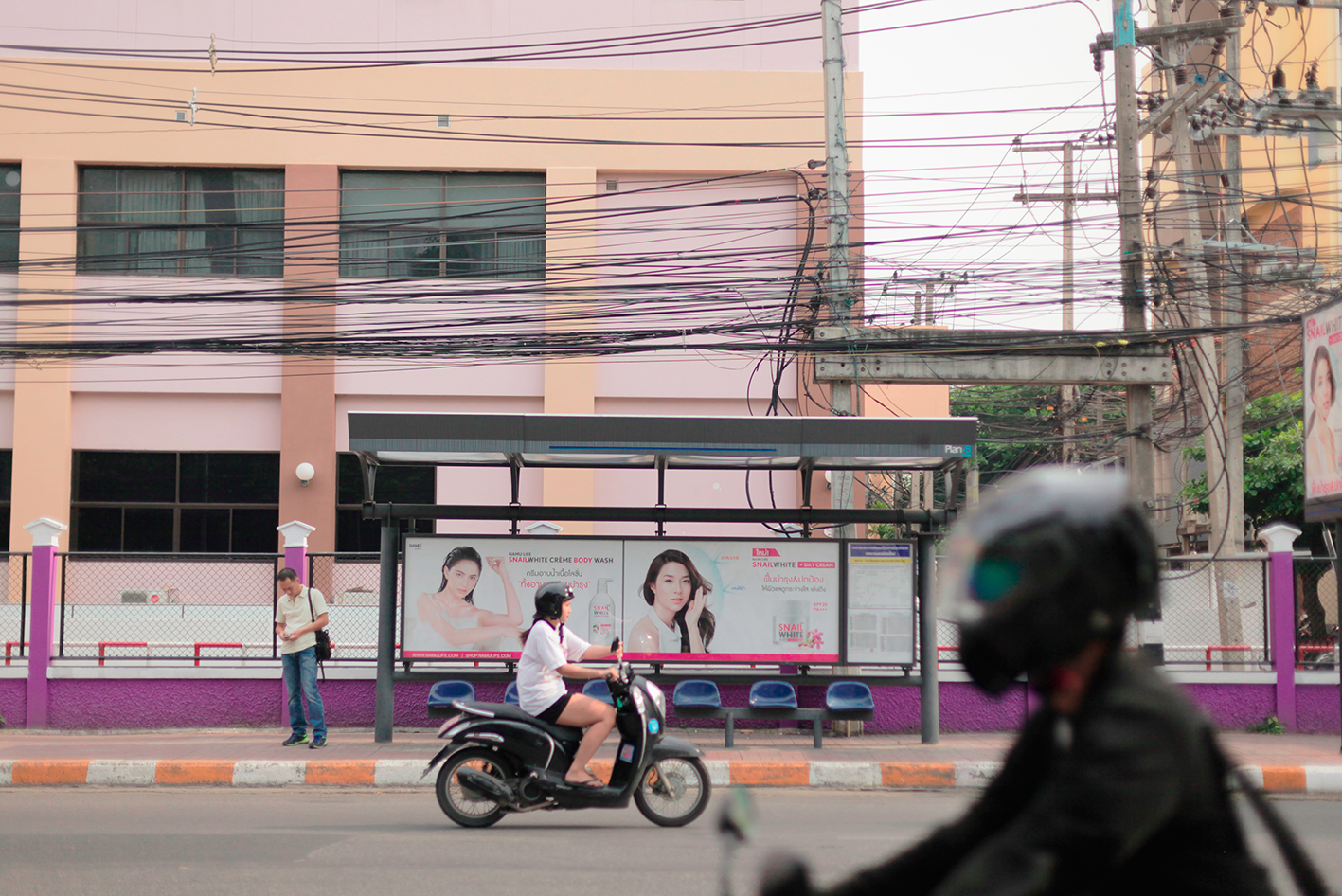 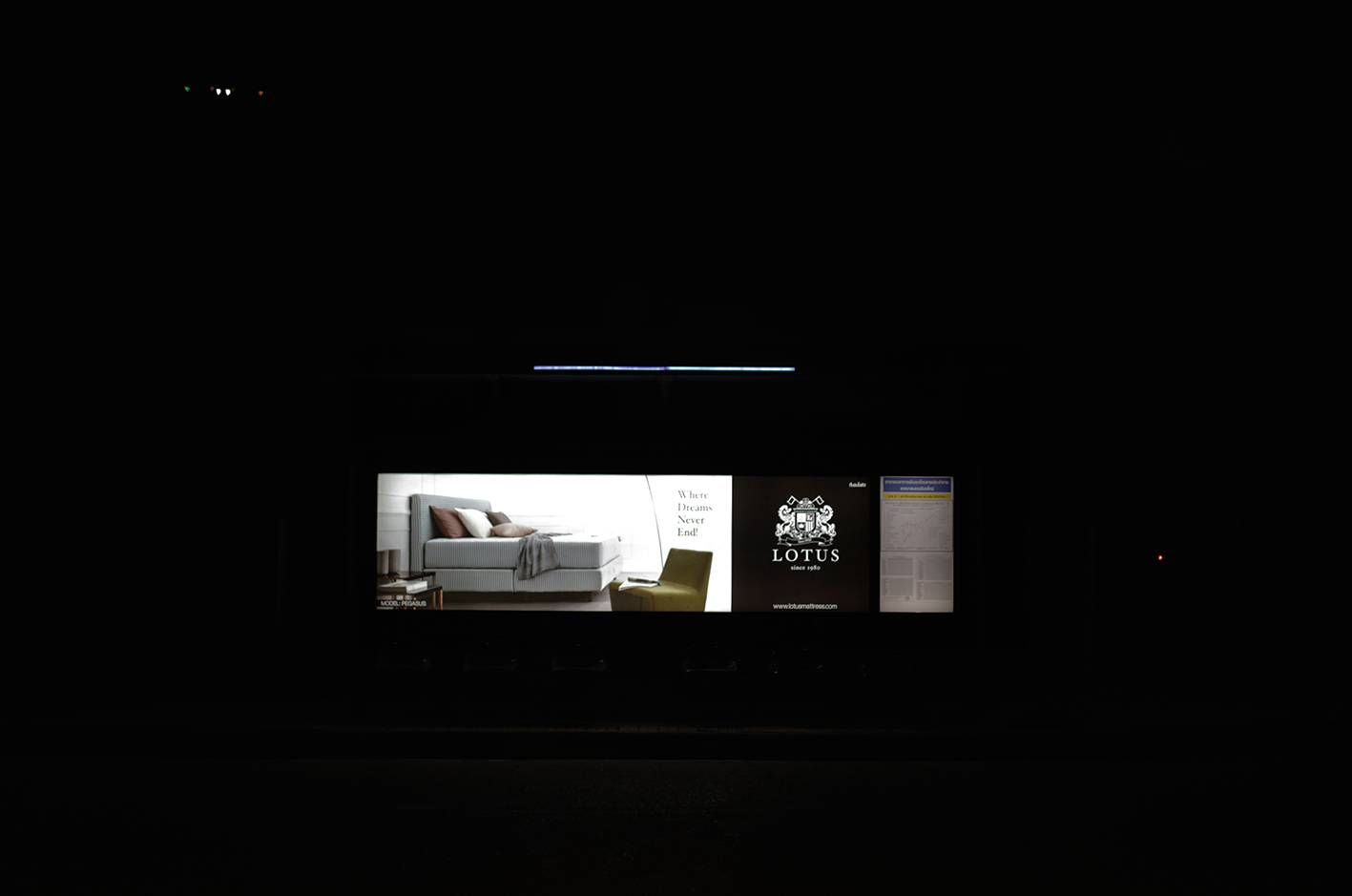 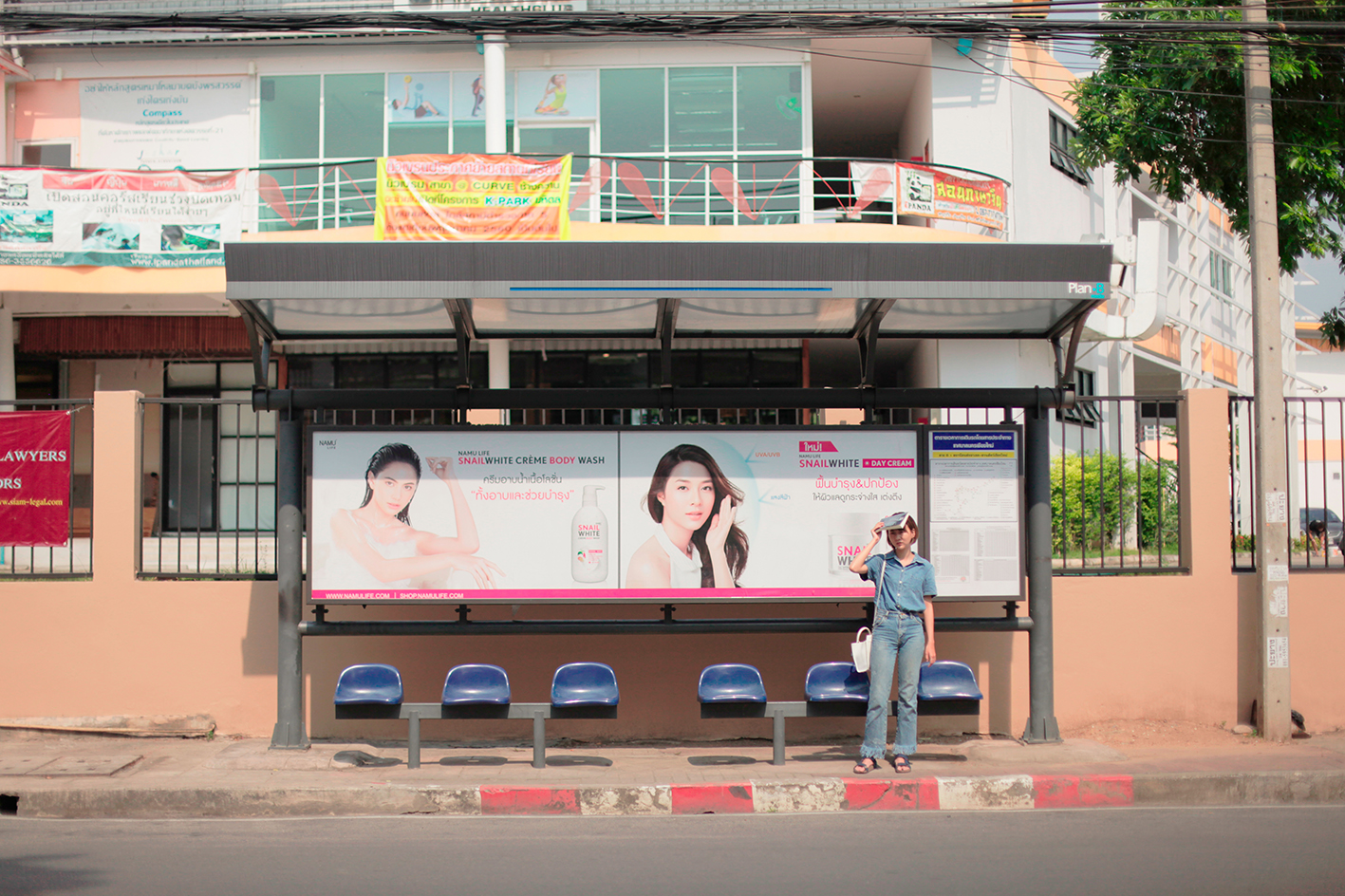 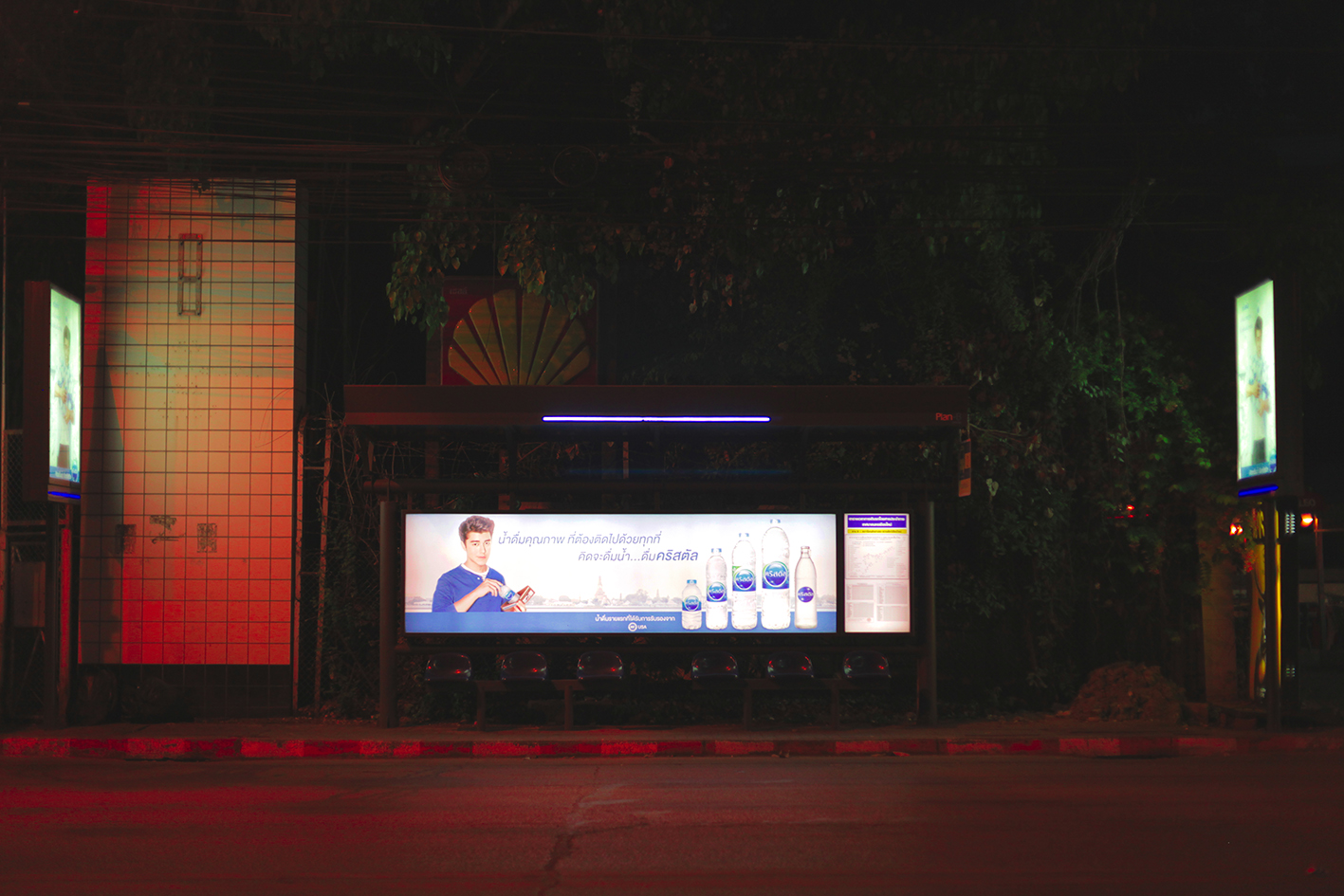 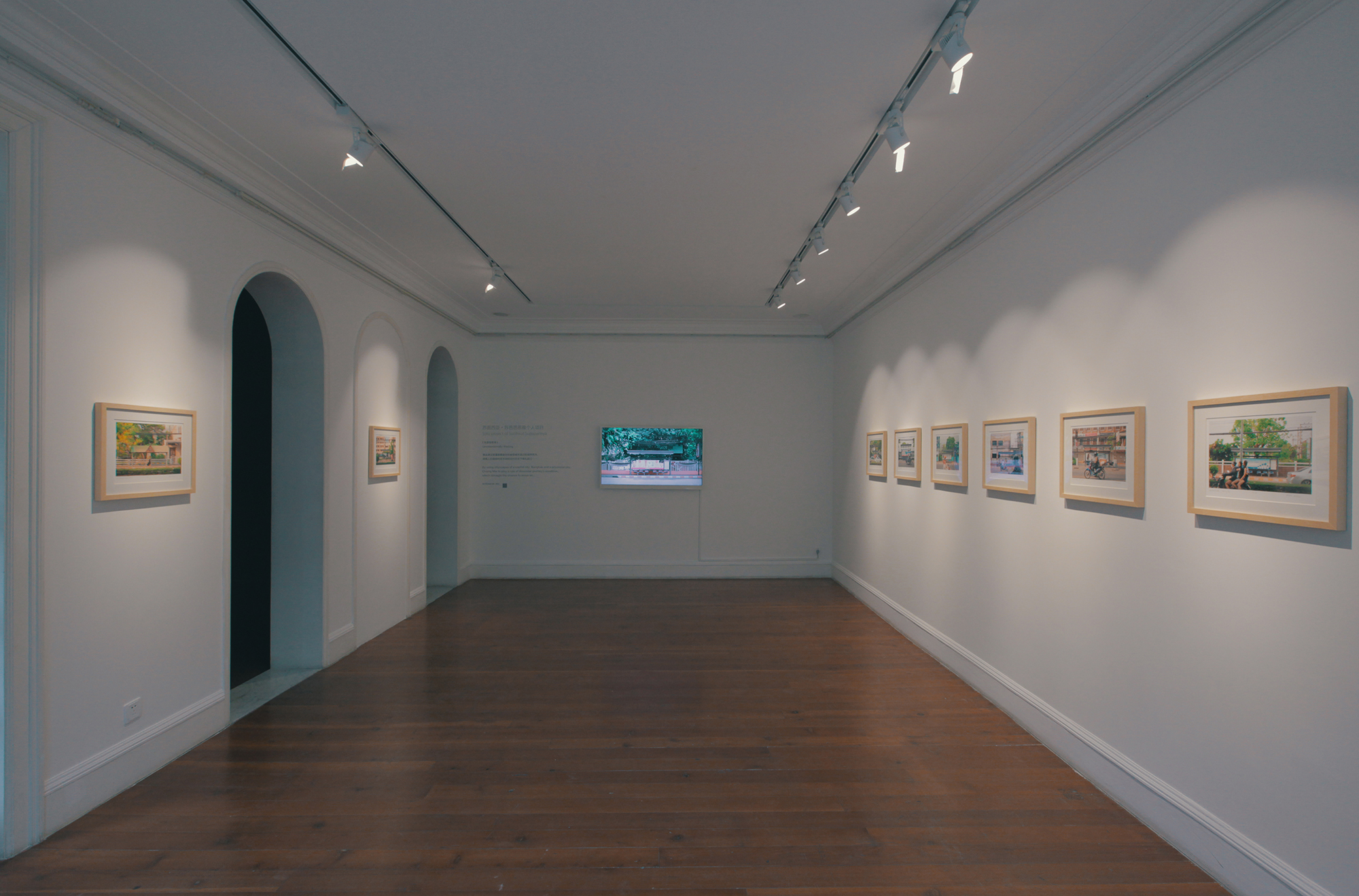 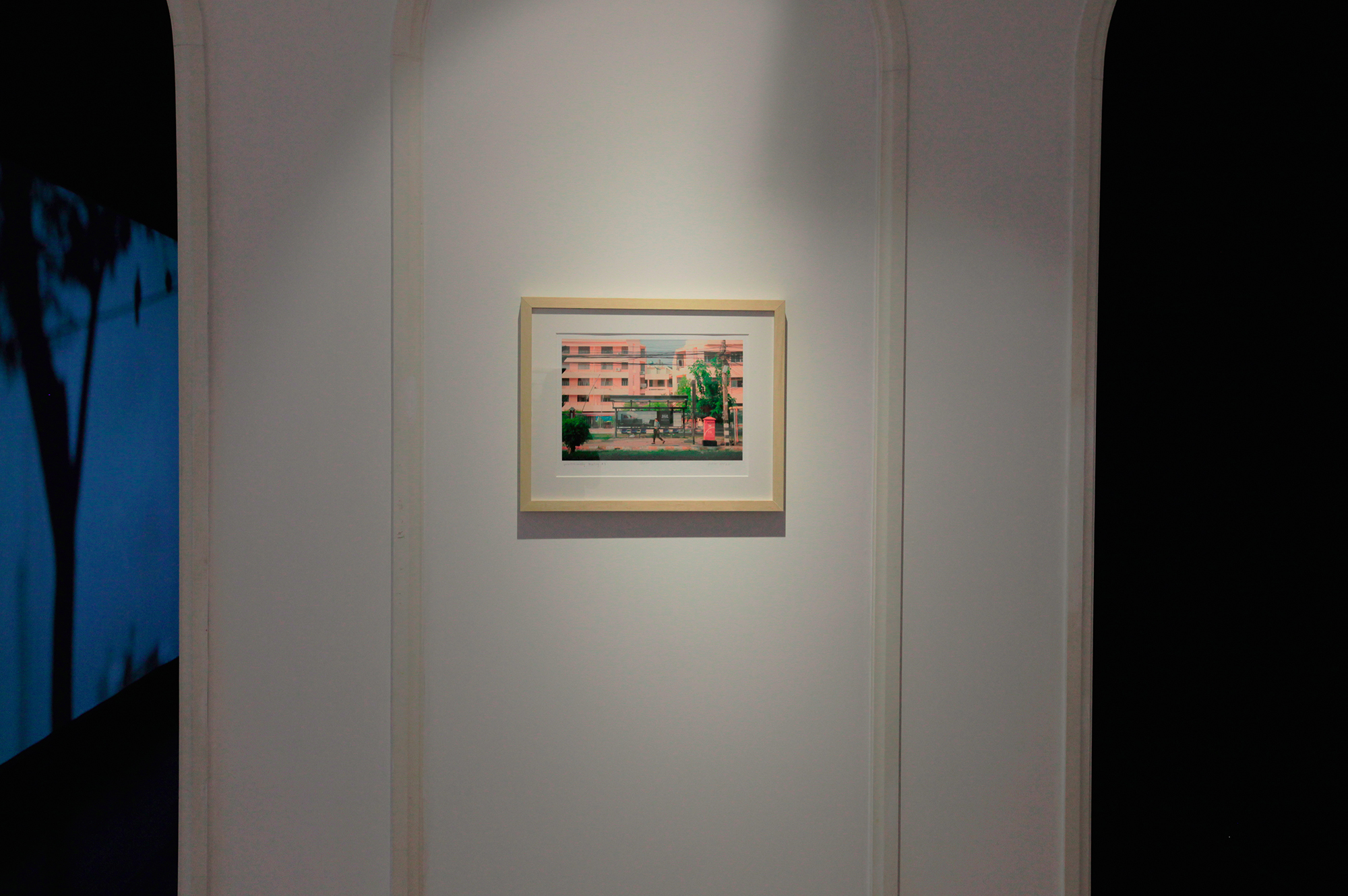 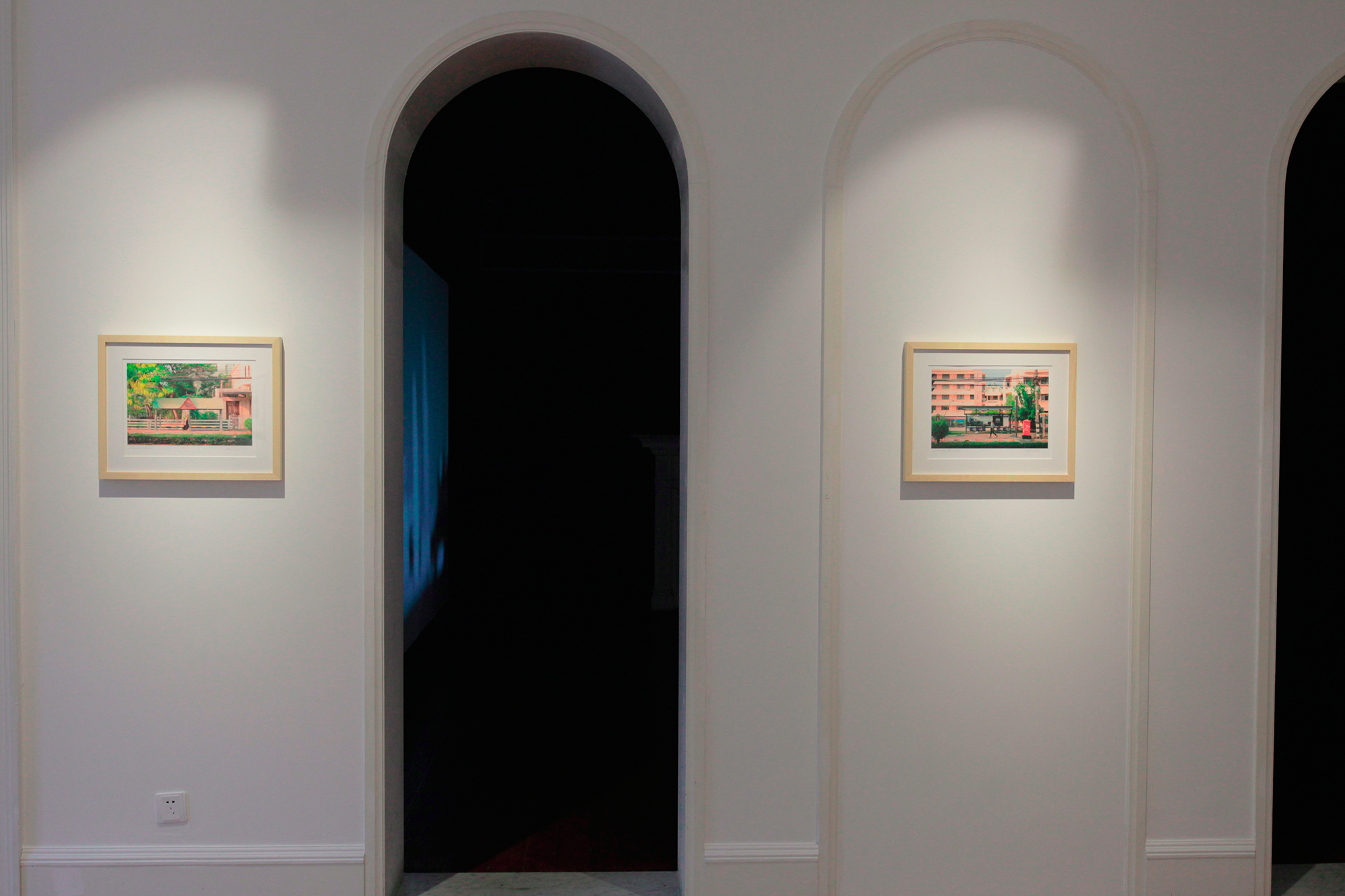 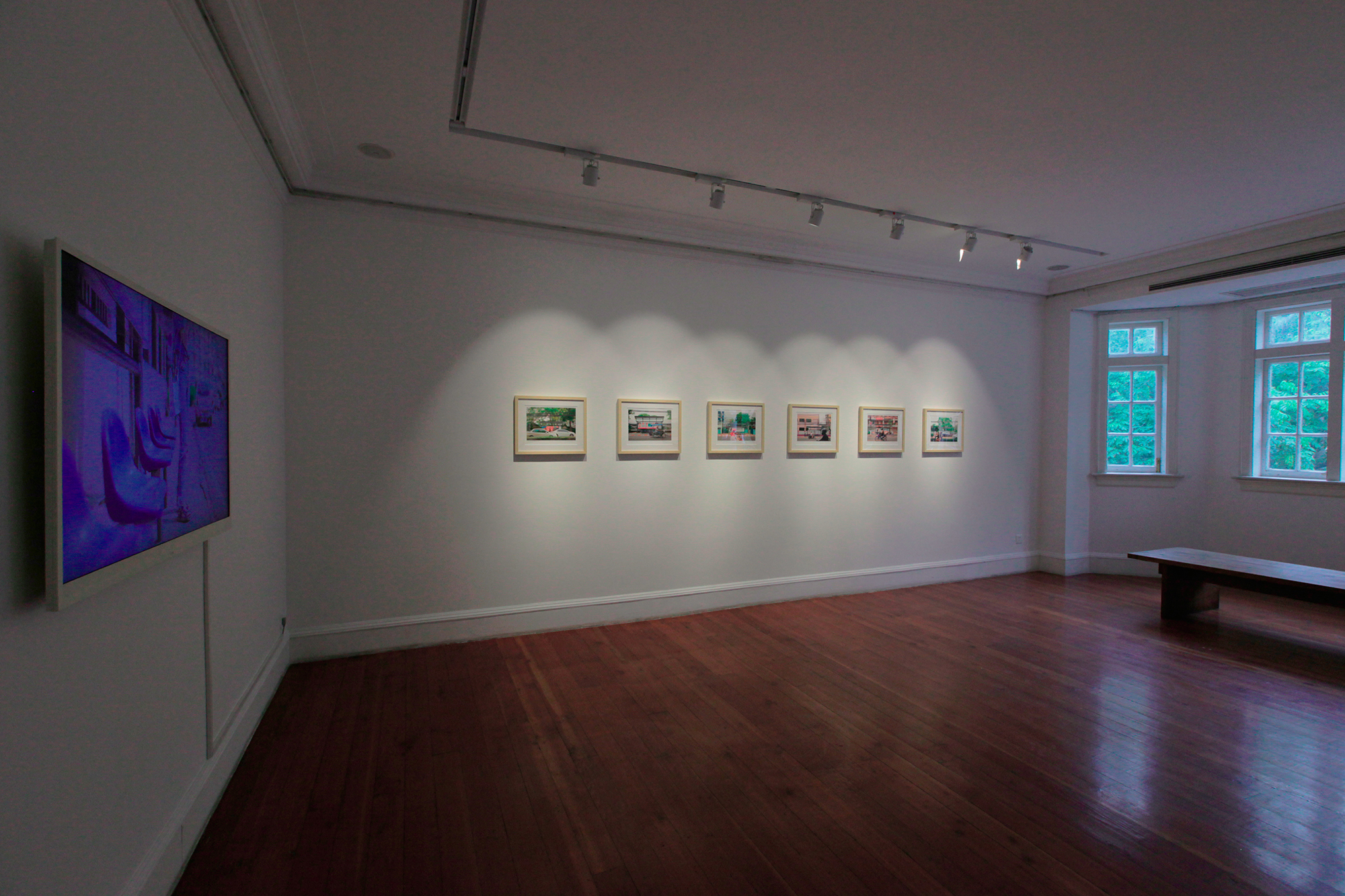 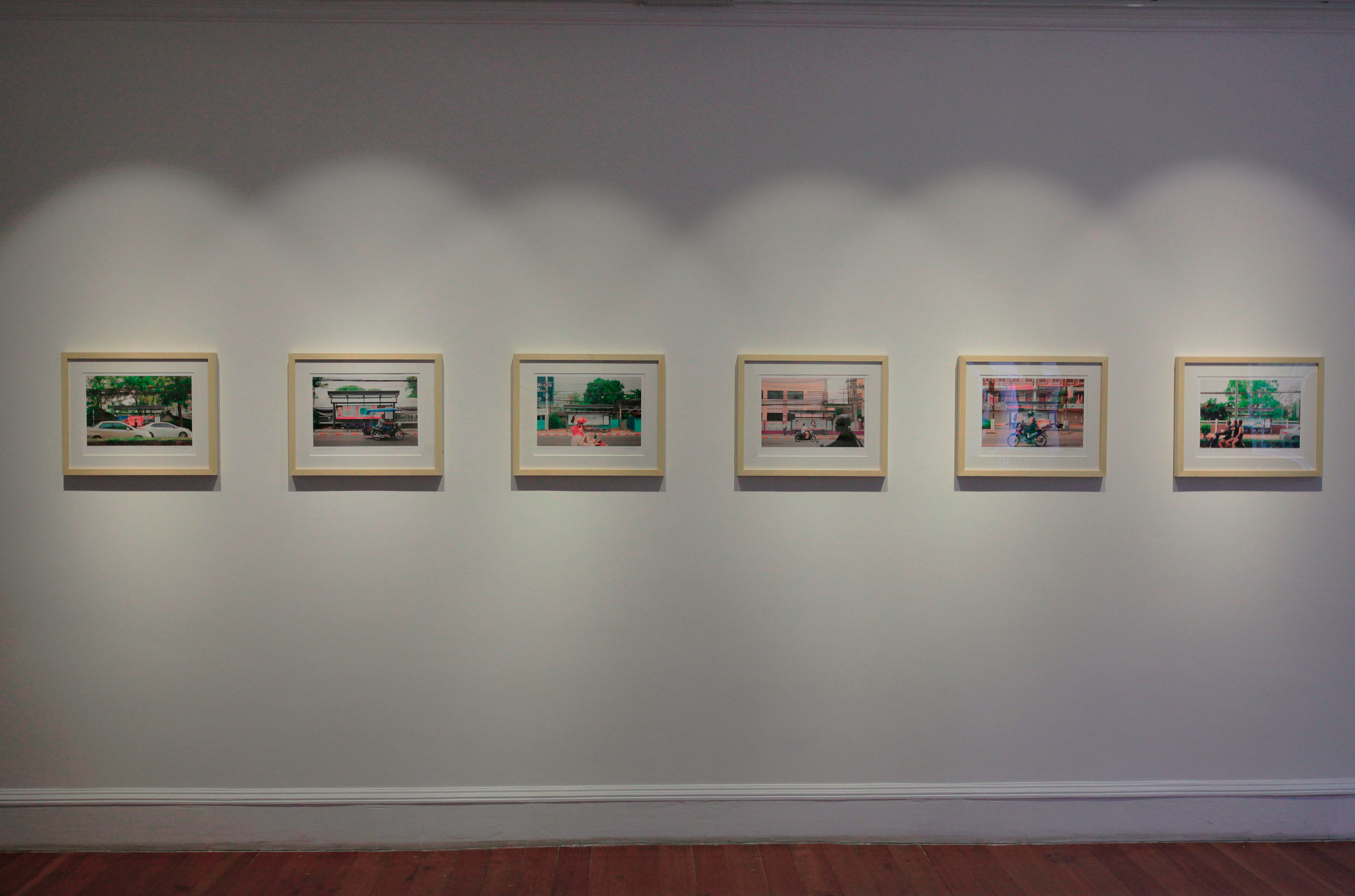 Unintentionally Waiting uses moving images and photographs to show how local governments struggle to facilitate services to the public. On one hand, the local installation of bus-stops is a front to earn more income from the accompanying advertising space, and on the other hand, local authorities want to make a show of striving to solve the long-running problem of inefficient public transportation.

Public buses pass and stop at only some areas
while abandoning them on other routes.
Passengers are kept waiting.
They become sculptures, standing to display advertisements.

At night none of the public buses run.
But the bus stop lights are turned on.
What’s their purpose? Brightening advertising?

The bus stops call eyes to advertise, rather than calling buses to stop?
Bus stops often stand on roads with proper sidewalks in tourist attraction areas where advisement are visible to the largest audience. In some areas, the bus stops stand less than a minute walk from each other!  This work exposes the non-functional bus stops of Chiang Mai where passengers wait for buses that never arrive. Their act of waiting is parallel to the larger situation of the country’s frozen progress, with uncertain promises from their leader.

—
Unintentionally Waiting produced and showed with Roundabout at km 0 for a Duo exhibition at Leo Gallery Shanghai.
The project works around the notion of time wasted in transit. The 2 works that use cityscapes—Bangkok and the city of Chiang Mai—to show the condition of two dissimilar journeys, struggling for the chance to move forward. In the big picture, Thailand has been struggling with political turmoil for more than 10 years. At the provincial level, local governments struggle with shrinking budgets to facilitate public services. The centralization of budgets and authority in Bangkok maintains the weakness of provincial Thailand. At both the local and central level, the country has lost the opportunity to enhance its potential and move forward.

“Unintentionally Waiting” has been shown in the following exhibitions and countries: