วัตถุโคจร, 2006
Planetarium tent made by Velcro and reflective sheets on cotton and flashlights (4×4 meters)

When Pluto was disregarded as a planet in our solar system due to its lack of gravitational pull and orbit, it became clear this “knowledge” is not a “fact” that scientists used to explain their study. 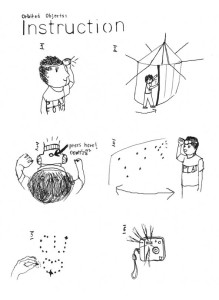